A Discourse Analysis of Selected National Anthems of the World Countries

The present study investigates the speech functions fulfilled by the sentences of a randomly selected body of national anthems of 70 countries using content analysis. The study reveals that these relatively short texts convey the richest and most impressive concepts to the readers or listeners. The results of the study indicate that 29 different functions are represented by sentences in the anthems analyzed among which 'description' and 'address' are the most frequent ones and the least frequent ones are 'consolation', 'warning' and 'reproof'. Twenty five categories of these functions have some syntactic and lexical features in common. The results also show that the national anthems of Egypt and Palestine have the most and those of Greece and Pakistan the least intensive load of meaning. Other results indicate that the following concepts appear in all the analyzed national anthems: 1. Aggression, such as war, fight, 2. Pain, such as suffering, sacrifice, martyrs, 3. Liberty, independence, and rejection of slavery, 4. Nature, mountains, rivers, specific places, 5. Joy, such as songs, happiness, and love, 6. Religion, faith, God, prophet, 7. Nostalgia, such as history, memories, ancestors, and 8. Other abstract notions showing high values such as glory, honor, pride, unity, loyalty, justice, and peace. 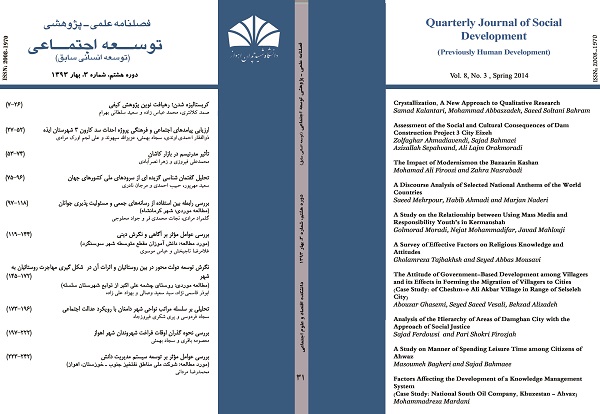